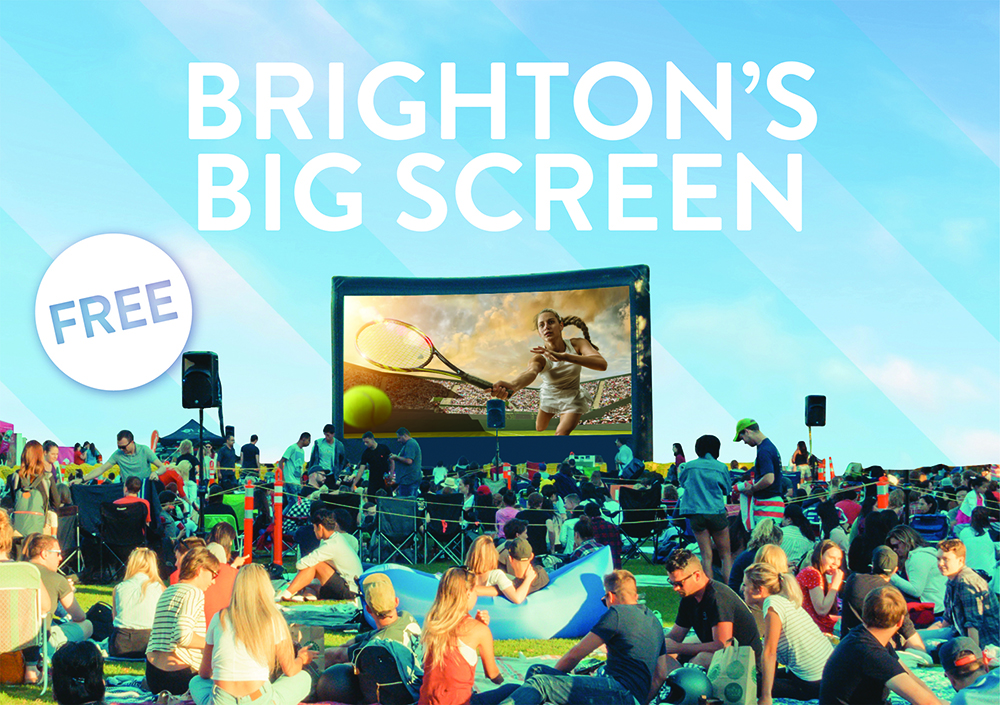 BRIGHTON’S BIG SCREEN RETURNS TO BRIGHTON MARINA
Showing live sport and family films
After two years of the pandemic, with little happening in the way of sport or entertainment, Brighton Marina is delighted to announce the return of their Brighton's Big Screen.

Between 27th June – 24 July, Wimbledon, live sport and family films will be shown at the Village Square at the Marina.

Wimbledon will commence on 27th June - 10th July and will be LIVE on the big screen and free to watch. Britain’s number 1 Emma Radanucu, should she be declared fit enough to play at Wimbledon after her "freak" injury at the Nottingham Open recently, will begin her campaign on either Monday 27 or Tuesday 28 June, when the first round matches take place.

2017 was the first year that the Marina offered up free entertainment in their Village Square on a big LED Screen. The success of that event propelled Brighton Marina to continue every year until the pandemic.

Sophie Chandler, Marketing Manager for Brighton Marina, who has organised the Big Screen every year said, “It is fantastic to be welcoming back our regulars and a lot of visitors to Brighton Marina. The fact that we can offer Wimbledon live, other headline sports, and family films for free, is something we take pride in.”

Following Wimbledon Live, Brighton Marina’s ‘Screen on the Green’ will be showing family films such as Sonic the Hedgehog, West Side Story, Sing 2 and Reminiscence, providing something for everyone. In between films there will be other live sports including top cricket matches, The World Games, Golf Open Championships, the World Athletic Championships & the F1 Lenovo Grand Prix de France.

There will be no films during Wimbledon due to the number of live matches.

Residents and visitors will be able to sample food and drink from all the outlets around the Marina and in the Village Green which offer everything from Greek food at Skara, light lunches and snacks from Cherry Tree, Bella Napoli, Café Rouge and the Laughing Dog Café offering ice cream, coffee and sandwiches.